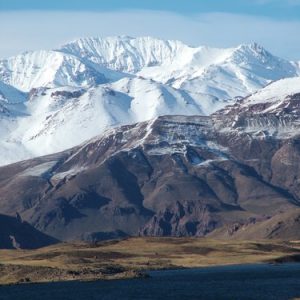 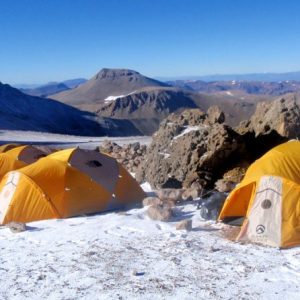 The Domuyo is a volcano that is born in the Cordillera del Viento, in the north of the Patagonian province of Neuquén, in the southwest of Argentina, with a height of 15449ft / 4707m, it is the highest mountain in Patagonia. In its geography, the Patagonian landscape and the Andean semi-desert of southern Mendoza converge, which makes this expedition to Domuyo a mountaineering experience different from the other mountains of Patagonia and the Cuyan Andes. But beyond the height above sea level, what is impressive is its structure. The powerful south face, which is partially integrated into the route known as normal and the most used, has a ridge that, seen from the Covunco Valley, really moves.

The volcano is located on the edge of the so-called Cordillera del Viento, in the north of the province of Neuquén, in the northern reaches of Patagonia. This mountain range does not belong geologically or geographically to the Andes Mountains and runs in the NNO – SSE direction. Millions of years ago, before the very formation of the Andes, the area currently occupied by the Domuyo was completely covered by the sea. For this reason, you can find many marine fossil remains such as ammonites, trilobites, algae, and others that are usually found on its slopes. Volcanic and eroded rock is the common denominator of the entire terrain and represents a singular inconvenience when traversing the long snow-free runs and the steep exposed edges.

From its imposing height, it is possible to appreciate the Southern Cordillera of the province of Mendoza, the northwest of Neuquén and the neighboring country of Chile, and volcanoes such as Copahue, Antuco, Sierra Velluda, Nevados de Chillán, Tromen, and the Campanario and Sierra Nevada hills.

Day 01 Meeting with the guide and organization
Meeting in Varvarco, Department of Mines, Neuquén.
The previous meeting with the mountain guide, equipment check for the journey that will take us to the top of the Domuyo Volcano and talk about the technical details of the ascent.

Day 02 We go to the Camp
From the Hostel, we go in all-terrain vehicles for 1 hour until the beginning of the ascent path.
Throughout the day we will slowly gain height along the mountain path located at the foot of the volcano, right here begins what we call the volcano valley until we reach the base camp at 3100 meters above sea level, in which we will have lunch and do a break. From there we continue for a couple of hours to our final camp at 3400 meters. (+ 1000m elevation gain)

Day 03 Summit Day
Today the activity begins early, at 3 am to be walking at 4 am, bound for the summit.
We still have 1400 meters of unevenness to the summit of the volcano along a quiet path that rises little by little and that generally does not present any technical difficulty for the ascent trekking. Close to 4000 meters high we reach the most delicate sector due to the conditions of the terrain and the slope that this mountain offers us, for which we make use of technical material to avoid it safely. After that step, the path continues without difficulty.
The total ascent to the summit of the Domuyo Volcano takes us between 7 or 8 hours to then descend the same path to our camp at the base of the mountain and rest. (+1400 m elevation gain)

Day 04 – Return to the beginning and bathe in the hot springs!
This day we return to the parking sector on a decent walk and once in the vehicles, we go to a place called “Aguas Calientes” that has a natural river with thermal waters at 37 ° C. This is a great prize for the physique so demanded on the mountain. After this well deserved moment of relaxation, we headed back to Varvarco to sleep. (- 1000m unevenness)

Multipitch Rock Climbing in Mendoza
Climb in one of the best climbing locations in Argentina and the best granite ever, Professional climbing guides with more than 20 years of experience!
Season
September-May
Duration
One Day
Price
From 165 U$D

Mendoza Day Trekking Cordon del Plata
Season
All year round
Duration
One Day
Price
From 120 U$D
If you cannot find a suitable itinerary or date, please do not hesitate in contact us and we will arrange a private trip to suit your requirements. Simply call or email us and we'll construct the perfect program for you.
This website stores cookies on your computer. These cookies are used to collect information about how you interact with our website and allow us to remember you. We use this information in order to improve and customise your browsing experience and for analytics and metrics about our visitors both on this website and other media. To find out more about the cookies we use, see our Privacy Policy.
Accept